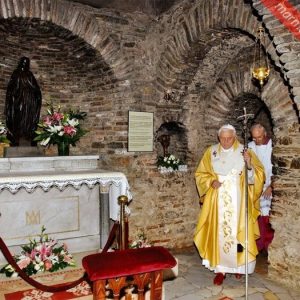 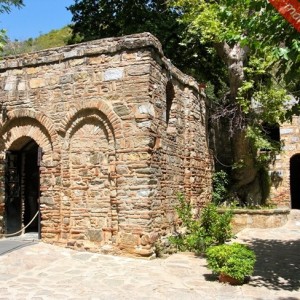 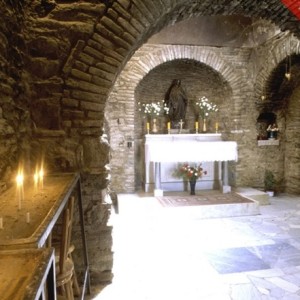 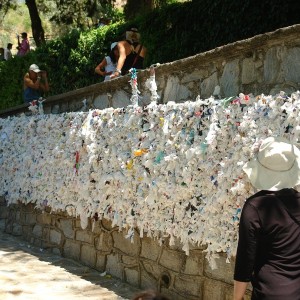 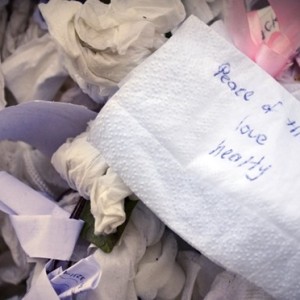 House of Virgin Mary from Marmaris

The House of Virgin Mary is a holy shrine situated on the top of “Bulbul” mountain just 9 km from Ephesus. The shrine is in a nature park between Ephesus and Selcuk and has a marvelous atmosphere with greenery all around. This peaceful site is sacred to both Muslims and the Christians, and many pilgrims as well as tourists visit this place in many numbers. This is the place where Virgin Mary, the mother of Jesus Christ spent the last days of her life. A popular Christian tradition assumes that she was brought here by Apostle John after the Resurrection of Christ. Saint John stayed here for many years spreading Christianity in the area. Mary preferred to live in this secluded place far from the crowd and away from the eyes of the Roman soldiers.


The House of Virgin Mary is not by itself a large monument, but a chapel modest in area. The age of the preserved foundation stones and other construction area coincides well with the Apostolic Age. Only the minor add-on outside the shrine and the garden landscapes are seemingly new. When a pilgrim enters the building, it has a single room with an altar where a large statue of the Blessed Virgin Mary is placed prominently in the center. On the right side of this, there is a small room which is believed to be Virgin Mary’s restroom. The traditional tales relate that there was a small canal like flow of water that ran through this small room, the same water is now seen in the drinking water fountain found at the entrance to the shrine.

One can see the “Wishing Wall” just outside the shrine where pilgrims tie their personal wishes written on a fabric or paper. A range of flowers and fruits are seen growing in the surrounding area. The site also has additional lighting system for monitoring it.

Another important and an interesting place nearby is the “Holy Water of Mary”, this is a water source found at the exit area of the church and the water is believed to have some miraculous healing powers and enhance fertility; people visiting this place can be seen collecting this water from the source.

The first Pope to visit this place is Paul VI, this happened in July 29th 1967 , he led the liturgy and gave a bronze candle holder as a gift. Later on, at 30th November 1979 Pope Jon Paul II also visited the place celebrated the Mass and declared the House of Virgin Mary as a Christian pilgrimage place. At 29th November 2006 Pope Benedict visited the House of Virgin Mary and celebrated Mass. Muslims also visit this place as they revere Mary as mother to one of their Prophets. Every year on the 15th of August, “The Feast” is organized here to commemorate Virgin Mary’s Assumption in cooperation by the Orthodox, Catholic and Muslim clergy. This is one of the rare occasions you will see anywhere.

During the day trips from Marmaris to Ephesus , tour groups pay a visit to the House of Virgin Mary and spend some time here.

What is the Airport code for Marmaris
February 26, 2017

Romantic Things to Do in Marmaris
February 6, 2018
Share with Google+Share with FacebookShare with PinterestShare with LinkedInShare with WhatsAppShare with Twitter
Go to Top