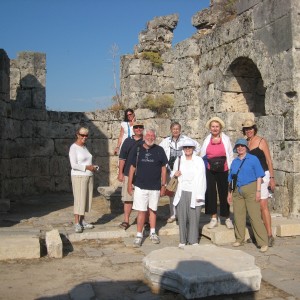 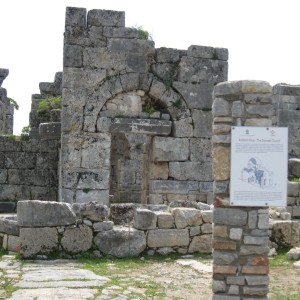 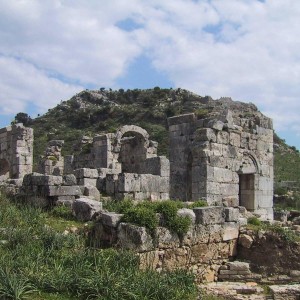 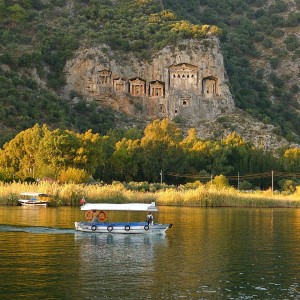 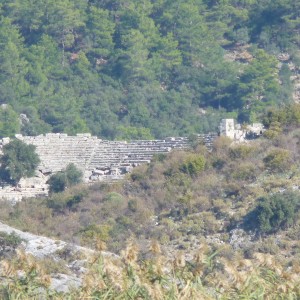 Caunos, the site of an ancient city is situated on the western bank of River Dalyan coinciding very much with the present village of Candir just opposite to the Town of Dalyan. The ancient city was once a harbor, but now it lies quite far away from the seashore.

It has witnessed the rise and decline of many empires, civilizations and cultures and has a history of over 3000 years. Caunos may be as splendid as other ancient sites in Turkey, but the place has a remarkable tranquility, it is quiet and picturesque.

Archeological sources date the foundation of this city to 9th century BC. This important harbor city bordered another city of Lycia and also had cultural influences by its neighbor. The original city had a strong Hellenistic influence as evident from the Greek-age sculptures, the ruins of these can still be found at the city site. Later on, many civilizations like the Romans, Persians and the Turks gained control over the city one after the other. Under the Ottomans, the city was re-fortified and the city walls were constructed on the Acropolis.

The remains in this city site include a well-preserved ancient theatre that has a capacity to accommodate as many as 5000 people at a time. The other remains include the measuring platform, the Temple of Apollo, a Byzantine Basilica, the Roman baths, the agora, the shrine of Aphrodite Euploia, the fountain building, the Monopteros and magnificent rock tombs, known as the “Kings’ Tombs” situated next to the site. To the north-west of this city settlement, one can find city walls that were built during the 4th century BC and these walls are well preserved.

There are many legends that attribute the birth of the city. The city once had two harbors; the Southern Harbor was in use in the early Hellenistic ages. Due to the gradual silting of this harbor, the other known as Inner Harbor was formed and was in use during the later ages. Even after the silting of this harbor, the people of Kaunos had access to the sea through the inland waterways of the river Dalyan. Ancient rulers have recorded about the hold of malaria over the city. Malaria, earthquakes and the gradual silting of the harbor led to the abandoning of this city. Excavations in the city site are still underway and may reveal further monuments and sculptures in a future date.

How to Get a Work Visa in Marmaris Turkey
September 26, 2017
Share with Google+Share with FacebookShare with PinterestShare with LinkedInShare with WhatsAppShare with Twitter
Go to Top